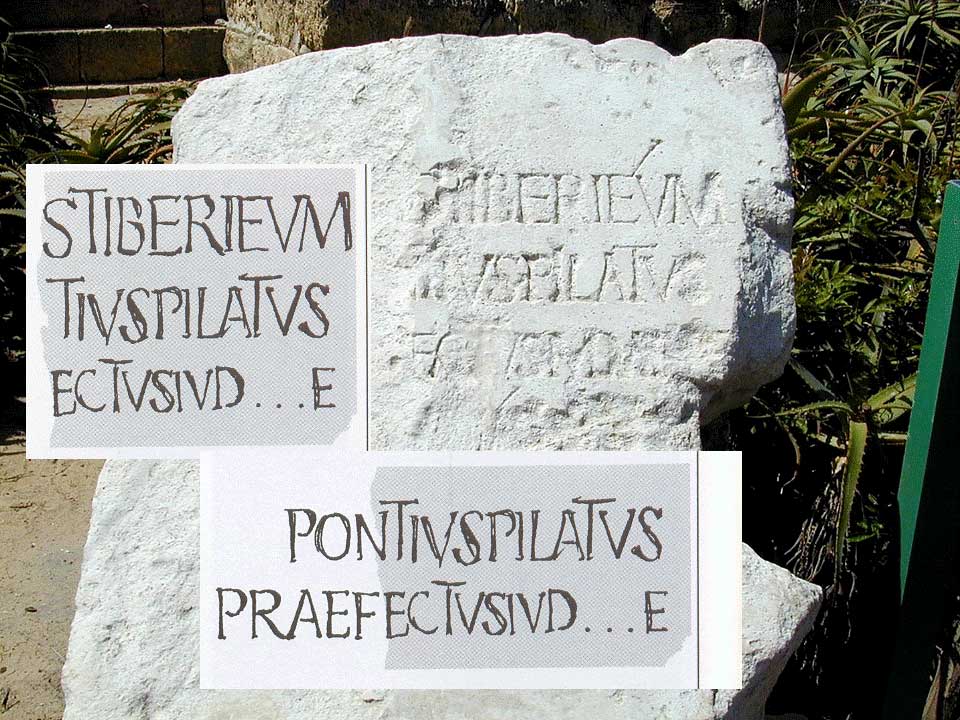 Liberals used to doubt that Pontius Pilate even existed, then this archeological discovery took place.  Ooops!  Liberal scholars have been shown time and time again that they are wrong about their skepticism of the Bible and it’s truthfulness and reliability.

Williams quotes another Muslim writer, Rasheed Gadir, who quotes the Qur’an Surah 4:154-159, verse 157 being the one verse in the Qur’an that denies the crucifixion of Christ.

“Based on the verses above, God made it appear to those present at the scene, that Jesus was being crucified. It is no wonder then, everyone thought what they were witnessing was the crucifixion of Jesus.

But the Quran also confirms that God saved Jesus. This is one further reason for Muslims to revere Jesus. He had a high standing before God, that Almighty did NOT allow his enemies to kill him.”

All this leads me to think that, people believed the Messiah was crucified, but they were unable to find his blessed body.

This secret was only revealed in the Quran centuries later: God has saved his prophet Jesus from his enemies. He did not allow the plotters to prevail against Jesus, who is one of five “Willful” major prophet. “ . . .

. . . In other areas where Islam and Christianity differ, I believe that the true teachings of Jesus were altered, and I have explained this position in other posts on this blog.

The crucifixion is different. There was simply no way for Christians and Jews to know that their Messiah was saved, not until God sent his last prophet, Muhammad (pbuh) with the Quran, to tell the true story of what really happened on that day, and how God saved his prophet Jesus, in what was the last miracle bestowed on Jesus before his second coming.”

The problem is, you have to explain Qur’an Surah 3:54-55 and 61:14 also – the context says only the unbelievers were deceived and the true believers became the uppermost, the victorious, the dominant ones, the obvious and manifest ones”.

Qur’an Surah 3:54 – “And (the unbelievers) schemed/deceived and tricked, and Allah too schemed and tricked, and the best of schemers/tricksters/deceivers is Allah.” (my expansion of the word and explanation) See all ten English translations. At the quranbrower below.   English translations of “plotting”, “planning” don’t do justice to the full significance of this Arabic word.  A few come close, but none of them bring out the full significance of the Arabic word, مکر (deception, trickery, guile, cunning) http://www.quranbrowser.com/

Especially since the context of Surah 3:54-55 is the crucifixion of Christ – it is portrayed as a deception by Allah, along with Surah 4:157-158, that Allah tricked the Jews into thinking that they had crucified Jesus. That means also that all the true followers of Jesus, (ie, the Christians), and pagan Romans also were deceived.  Everyone was deceived for 6 centuries, until Muhammad came, is what you are saying.  Yet that contradicts Surah 3:54-55 and 61:14 – because it indicates that the Islamic followers of Jesus (who you believe are the real followers/disciples), were not deceived and became the dominant, victorious, uppermost, manifested ones – and that they will be until the day of resurrection.   There is zero evidence for the Muslim view that the original disciples were “proto-Muslims”.   No, they taught and did exactly what the 27 books of the NT says they did and taught.  Peter, John, Matthew, James, later Paul, all their views are in the NT and were not like what Islam tries to say about them.

The Qur’an says the disciples of Jesus were full of integrity, helpers of Allah, and believers in Allah, and that Allah would never trick the believers, hence there is a big contradiction in the Qur’an and Islamic theology on this point. (see Surah 5:111; 61:14. ) Muslims read their theology back into the previous Scriptures; and claim that whatever contradicts the Qur’an is later development or redaction or corruption.

“uppermost”, “victorious”, “dominant ones”, “manifest ones” – 6 centuries of belief in the crucifixion, resurrection, Deity of Christ, Son-ship of Christ, the Trinity, etc.  –  oops, that doesn’t work!  The true believers became the “uppermost” – victorious. The Muslim view contradicts the first 6-7 centuries of Christian history.  (and beyond) That also means that this deception dominated history for 6 more centuries until Islam came later and “set the record straight” with “40 lonely Arabic words” (James White)  in one verse.  Right.

The historical evidence is massive against the Qur’an’s one verse, Surah 4:157.   About 1/3 of all the gospels is related to the last week of Jesus’ life, His triumphal Entry into Jerusalem on a donkey, Olivet Discourse, Last Supper, Upper Room Discourse, Trials, suffering, death, burial, and resurrection. There is also Tacitus, Josephus, Suetonius, Pliny, the early church fathers, etc. Archeology on Pilate, the empty tomb, the appearances, etc.

Jesus combined the issues of His suffering and death on the cross and resurrection with repentance and forgiveness of sins – Luke 24:46-49

I am a follower of Jesus Christ. I am a sinner who has been saved by the grace of God alone (Ephesians 2:8-9), through faith alone (Galatians 2:16; Romans 3:28; 4:1-16), in Christ alone (John 14:6). But a true faith does not stay alone, it should result in change, fruit, good works, and deeper levels of repentance and hatred of my own sins of selfishness and pride. I am not better than you! I still make mistakes and sin, but the Lord is working on me, conforming me to His character. (Romans 8:28-29; 2 Corinthians 3:16-18) When I do sin, I hate the sin as it is an affront to God, and seek His forgiveness in repentance. (Mark 1:15; 2 Corinthians 7:7-10; Colossians 3:5-16 ) Praise God for His love for sinners (Romans 5:8), shown by the voluntary coming of Christ and His freely laying down His life for us (John 10:18), becoming flesh/human (John 1:1-5; 1:14; Philippians 2:5-8), dying for sins of people from all nations, tribes, and cultures (Revelation 5:9), on the cross, in history, rising from the dead (Romans 10:9-10; Matthew 28, Mark 16:1-8; Luke 24; John 20-21; 1 Corinthians chapter 15). His resurrection from the dead proved that Jesus is the Messiah, the eternal Son of God, the word of God from eternity past; and that He was all the gospels say He was and that He is truth and the life and the way to salvation. (John 14:6)
View all posts by Ken Temple →
This entry was posted in Apologetics, Crucifixion of Jesus Christ, Historical Jesus, Historical reliability of the Bible, History, Islam, Muslims, Reliability of the Bible. Bookmark the permalink.