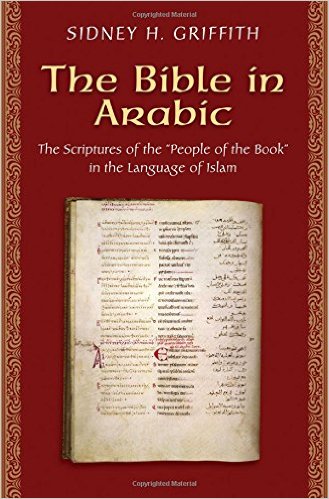 Paul Williams writes another article (against Sam Shamoun’s article that shows the Qur’an and Griffith is wrong) that uses Sidney H. Griffith’s book, The Bible in Arabic, to try and show that the Qur’an is aware of doctrinal Christianity at the time, but just exaggerates as a creative strategy and rhetorical device in it’s own ‘prophetology’.  (I would assume this means “The Qur’an’s own doctrine of prophetic ministry against idolatry”) [Note: Williams article only uses Griffith’s work up to page 34, and so the contents of this article only reflect that content so far.  Williams says he will continue, as he reads Griffith’s book.]

Since the Qur’an is inaccurate about the doctrine of the Trinity and the Sonship of Christ and the Deity of Christ, calling it’s inaccuracies a “creative strategy” and “rhetorical device” is indeed creative itself!

See the discussion in the comboxes.  I have corrected some of my typos and mistakes and also not included side issues about Athanasius and Augustine and the canon and Apocrypha and other side comments that the Muslims have made.  One can go to the article and see the whole conversation.

Some of my responses:

Paul Williams use of Griffiths and Quotes from Griffiths are in blue.

It seems clear, therefore, that here the Qur’an, aware of actual Christian usage, has for its own rhetorical polemical reasons, reversed the customary Christian order of words in these formulaic phrases in order the more effectively to highlight what it considers wrong about Christian faith in Jesus, and to criticise what it regards as the objectionable Christian doctrine that God has a Son and that He is the Messiah, Jesus of Nazareth.

This point that Griffiths is trying to make is about as clear as mud. It is just an assertion. How could it be “more effective” if it is inaccurate? “God is the Messiah” is inaccurate, as Griffiths admits. “God is one of three” is inaccurate, he also admits. And seeing Mary as part of the Trinity is inaccurate (Surah 5:116). It seems to me the easiest explanation is the right one, since you admit that Muhammad was illiterate (Surah 7:157), he is just hearing things and seeing the popular piety around Mary (but ignorant of doctrinal creeds and the Scriptures) – Muhammad is seeing the icons, statues and emphasis on Mary, and prayers to Mary (all man-made traditions that were becoming some of the main heresies and problems that Protestantism has with Roman Catholicism and Eastern Orthodox – they have exalted Mary too much. Praying should only be to God. It seems clear that Muhammad got things mixed up and garbled, and got info from heretical groups and apocryphal gospels and Jewish Midrash and Talmudic writings, all non inspired sources. Muhammad and the early Muslims may also have come across the Collyridians in N. Arabia (today’s Jordan), who worshipped Mary.

To have credibility in apologetics and intellectual arguments, the opposing side should accurately understand and communicate what it is critiquing. This is basic logic and courtesy. The Qur’an fails at that big time.

You (the Muslims objecting to my point about intellectual arguments) are not dealing with the specific issue here at this post; and divert the subject matter to the issue of the Tahreef Al Nass تحریف النصّ / Tahreef Al Matn تحریف المتن (Textual Corruption of the Bible).

Surah 5:47 and 10:94 are clear – given those verses, there cannot be corruption of the text in Muhammad’s day; which proves the Bible is not corrupted, since we have basically the same text today. (the textual variants that we freely admit and publish do not affect doctrinal matters, since the doctrinal matters are repeated in other firm texts)

Paul Williams objected to me saying that the Qur’an in 5:47 and 10:94 affirms the Bible and does not see the Bibe as corrupted in it’s text in Muhammad’s day.

Williams:  “It doesn’t. The NT for example cannot be the injeel that was given to Jesus. The NT was written after Jesus.

Yes, it does. Yes the Father gave Him the gospel, the words of truth

Then they wrote it down later.

The Spirit guided them to write God-breathed Scripture.
John 14:26 – “all things” and “will bring to your remembrance all that I said to you”
John 16:13 – “all the truth”

But since all the accusations of the Qur’an against what Melkites (those that agreed with the Chalcedonian Creed – the Orthodox – “correct doctrine”), the Jacobites (Monosphysites in Syria), and Nestorians – they are all inaccurate – and all the charges are closer to the heretics or misunderstandings (Tri-theism , Mary as part of the Trinity (5:116), God having a wife and sex in order to have a son (6:101), saying “they say “God is the Messiah”- these three groups did not say any of those . . .

since those accusations of the Qur’an are inaccurate, the argument fails big time.

“creative” and “rhetorical strategies” is itself a strategy to avoid embarrassment of inaccuracy.

Monophysites or Mia-physites. (also the Coptic and Armenian Church are Mia-physite. ( one nature; that Christ’s human nature was swallowed up in His divine nature.)

All three groups agreed with the Nicene Creed of 325 AD and the Council of Constantinople of 381 AD – in the Trinity, the homo-ousias (same substance) of the Son and the Holy Spirit with the Father.

So, the Qur’an fails to argue against Christianity, because it cannot even describe what they believe accurately. (in those issues)

Griffiths suggests that the Qur’an’s criticism of Christian doctrines and practices indicate its polemical engagement with mainstream types of Christianity and not heretical Christians (see examples on page 27).

I am a follower of Jesus Christ. I am a sinner who has been saved by the grace of God alone (Ephesians 2:8-9), through faith alone (Galatians 2:16; Romans 3:28; 4:1-16), in Christ alone (John 14:6). But a true faith does not stay alone, it should result in change, fruit, good works, and deeper levels of repentance and hatred of my own sins of selfishness and pride. I am not better than you! I still make mistakes and sin, but the Lord is working on me, conforming me to His character. (Romans 8:28-29; 2 Corinthians 3:16-18) When I do sin, I hate the sin as it is an affront to God, and seek His forgiveness in repentance. (Mark 1:15; 2 Corinthians 7:7-10; Colossians 3:5-16 ) Praise God for His love for sinners (Romans 5:8), shown by the voluntary coming of Christ and His freely laying down His life for us (John 10:18), becoming flesh/human (John 1:1-5; 1:14; Philippians 2:5-8), dying for sins of people from all nations, tribes, and cultures (Revelation 5:9), on the cross, in history, rising from the dead (Romans 10:9-10; Matthew 28, Mark 16:1-8; Luke 24; John 20-21; 1 Corinthians chapter 15). His resurrection from the dead proved that Jesus is the Messiah, the eternal Son of God, the word of God from eternity past; and that He was all the gospels say He was and that He is truth and the life and the way to salvation. (John 14:6)
View all posts by Ken Temple →
This entry was posted in Apologetics, church history, History, Islam, Muslims, Paul Bilal Williams. Bookmark the permalink.