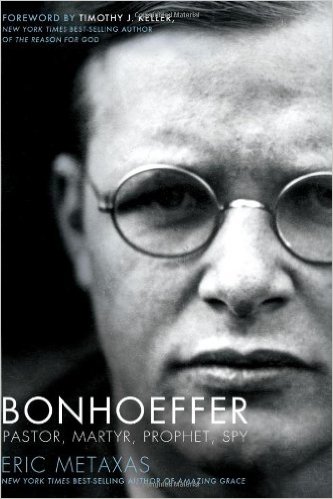 Adolf Hitler said basically, as he rejected the Christian religion of the history of Germany:
“Why couldn’t we Germans have a manly and warlike religion like Islam (he called it “Mohammadan”) or the Japanese religion – one that fights; not the wimpy and weak and meek Christianity.” (my paraphrase)

Here is his actual quote:

“It’s been our misfortune of have the wrong religion. Why didn’t we have the religion of the Japanese, who regard sacrifice for the Fatherland as the highest good? The Mohammadan religion too would have been much more acceptable to us than Christianity. Why did it have to be Christianity with its meekness and flabbiness?”

Besides Hitler admiring Islam, the chapter in Eric Metaxas’ book on “Nazi Theology” is…

I am a follower of Jesus Christ. I am a sinner who has been saved by the grace of God alone (Ephesians 2:8-9), through faith alone (Galatians 2:16; Romans 3:28; 4:1-16), in Christ alone (John 14:6). But a true faith does not stay alone, it should result in change, fruit, good works, and deeper levels of repentance and hatred of my own sins of selfishness and pride. I am not better than you! I still make mistakes and sin, but the Lord is working on me, conforming me to His character. (Romans 8:28-29; 2 Corinthians 3:16-18) When I do sin, I hate the sin as it is an affront to God, and seek His forgiveness in repentance. (Mark 1:15; 2 Corinthians 7:7-10; Colossians 3:5-16 ) Praise God for His love for sinners (Romans 5:8), shown by the voluntary coming of Christ and His freely laying down His life for us (John 10:18), becoming flesh/human (John 1:1-5; 1:14; Philippians 2:5-8), dying for sins of people from all nations, tribes, and cultures (Revelation 5:9), on the cross, in history, rising from the dead (Romans 10:9-10; Matthew 28, Mark 16:1-8; Luke 24; John 20-21; 1 Corinthians chapter 15). His resurrection from the dead proved that Jesus is the Messiah, the eternal Son of God, the word of God from eternity past; and that He was all the gospels say He was and that He is truth and the life and the way to salvation. (John 14:6)
View all posts by Ken Temple →
This entry was posted in History, Hitler, Islam, Jihad, Nominalism in church & culture. Bookmark the permalink.
%d bloggers like this: